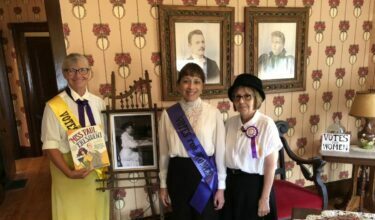 The Kenilworth Historical Society is celebrating “100 Years of Votes for Women” as well as other historical happenings through a newly launched series of virtual programs for viewing by the general public via social media, including the organization’s website (www.kenilworthhistoricalsociety.org) and Facebook page.

​The storybook readings are being presented by Kenilworth Historical Society board member and historical interpreter Karen DeMaio, who also is a 2nd-grade teacher at St. Theresa School in Kenilworth. Although the books are geared toward children, the message in each one is relevant, enlightening and appropriate for all age groups. The videotaped readings are preceded by a brief introduction to the Oswald J. Nitschke House (c. 1880) “living history” museum and cultural arts center by Kenilworth Historical Society president Shirley Boyden Maxwell followed by comments on the women’s suffrage movement by second vice president and educational programming chair Frances J. Day.

The first three programs in the “Keeping History Strong” series feature storybook readings that pay tribute to women whose valiant efforts in the decades-long struggle for women’s suffrage, the right to vote in elections, culminated with the August 18, 1920 ratification of the 19th Amendment to the U.S. Constitution, which extended such voting privilege to women and which was formally adopted into the Constitution on August 26, 1920 (now celebrated annually as “Women’s Equality Day”).

​The three colorfully illustrated picture books in the initial readings (First of which can be viewed by Clicking Here) are Elizabeth Leads the Way: Elizabeth Cady Stanton and the Right to Vote written by Tanya Lee Stone and published by Macmillan Publishers, highlighting the life of early women’s rights and suffrage leader Elizabeth Cady Stanton, 1815-1902, who helped change America forever by not taking “no” for an answer…

Second of which, Around America to Win the Vote: Two Suffragists, A Kitten, and 10,000 Miles written by Mara Rockliff and published by Candlewick, relating the story of two brave suffragists, Nell Richardson and Alice Burke, who in 1916 traveled across America in a two-seater yellow car to spread the word, “Votes for Women!” can be viewed by Clicking Here.

… And third of which, Miss Paul and the President: The Creative Campaign for Women’s Right to Vote written by Dean Robbins and published by Knopf Books for Young Readers, depicting the extensive work of leading 20th-century suffragist, feminist and women’s rights activist Alice Stokes Paul,1885-1977, whose valiant advocacy for women’s suffrage included an ambitious campaign to garner President Woodrow Wilson’s support in 1917-1918, will be posted on this website in November.

​To view and/or learn more about the videotaped “Keeping History Strong” series and other planned events/activities, please follow the Kenilworth Historical Society on Facebook, visit the organization’s website or call (908) 709-0434. The Kenilworth Historical Society is grateful to Paolo and Jeizza Andrade, Kenilworth residents and friends of the Society, who generously shared their videographic talents to make the virtual storybook readings possible.

​Although unfortunately COVID-19 has prevented the Oswald J. Nitschke House from opening on a regular basis, small group tours of the site may be arranged by calling (908) 709-0434. The Kenilworth Historical Society appreciates everyone’s continued interest and support, especially during these difficult,uncertain times, when the organization is unable (due to COVID-19 restrictions) to hold its usual fundraisers and social events. For information about how to donate to the non-profit Kenilworth Historical Society in order to help the Oswald J. Nitschke House “living history” museum and cultural arts center survive and thrive, please consult the organization’s website and Facebook page.

​The Kenilworth Historical Society additionally is seeking local stories, letters, diary entries, photos and other items that will help tell the story of the women’s suffrage movement through upcoming virtual/in-person programs and exhibitions.

The Oswald J. Nitschke House is one of Kenilworth’s few remaining original 19th-century farmhouses. Notably, it is the only museum of its kind in the area to portray and interpret everyday life in the early 1900s, particularly the inspiring story of late 19th-/early 20th-century immigrants in a developing suburb.

The Kenilworth Historical Society is an independent, volunteer-based, non-profit, tax-exempt, 501(c)3 organization dedicated to the research, preservation and interpretation of the historic Oswald J. Nitschke House, local history and culture.
# # #

Kenilworth Historical Society’s New “Keeping History Strong” Program Celebrates “100 Years of Votes for Women” — Shown here in the parlor of the Oswald J. Nitschke House (c. 1880) “living history” museum and cultural arts center, with a portrait (on easel) of leading 20th-century suffragist, feminist and women’s rights activist Alice Stokes Paul (1885-1977), are Kenilworth Historical Society board members (from left) Karen DeMaio, historical interpreter and second grade teacher; Shirley Boyden Maxwell, president; and Frances J. Day, second vice president and educational programming committee chair. They recently launched the organization’s new “Keeping History Strong” virtual programming series with DeMaio’s reading of three storybooks focused on the theme of women’s suffrage. The other portraits pictured (on the parlor wall) are of former Kenilworth Mayor Oswald J. Nitschke, for whom the house is named, and his wife Anna. The videotaped readings, the first of which is now available via the organization’s website (www.kenilworthhistoricalsociety.org) and Facebook page, are part of the Kenilworth Historical Society’s year-long celebration of “100 Years of Votes for Women,” particularly the August 18, 1920 ratification of and August 26, 1920 adoption of the 19th Amendment to the U.S. Constitution giving women the right to vote in elections.