OCT. 15-16 ’FOUR CENTURIES IN A WEEKEND’ AT NITSCHKE HOUSE TO FEATURE LIVING HISTORY, MUSIC, GARDENS AND EXHIBIT — ‘NEW ORANGE/KENILWORTH, A MELTING POT OF MANY CULTURES’ 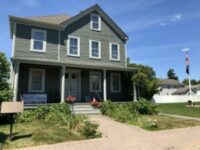 Visitors to Kenilworth’s historic Oswald J. Nitschke House (c. 1880), at 49 South 21 Street, on October 15 and October 16 will gain glimpses into everyday life as a late 19th-/early 20th-century immigrant in a developing suburb through an enlightening, interactive “living history” program based on the theme “New Orange/Kenilworth – A Melting Pot of Many Cultures.”

The Oct. 15-16 weekend activities at the Nitschke House will be offered to the general public from 12 to 5 p.m., during Union County’s annual historic sites tour, “Four Centuries in a Weekend.”  The Nitschke House is equipped with an elevator, and the building and gardens are fully accessible.  Admission is free.  For information, please call 908-709-0434.

The guided tour, geared to all age groups, will start in the site’s “teaching gardens,” where vegetables and herbs representing different heritage groups have been grown for use in a multicultural garden-to-table demonstration. Other activities will include the making of corn husk dolls (as there is corn in the site’s “Three Sisters Garden” in honor of Native American culture), crocheted items from cotton yarn (as there is a cotton plant in the garden), and a Crazy Quilt — plus music from around the world. Visitors will be shown the site’s period kitchen, bedroom, dining room, parlor and former Mayor Nitschke’s office. They also will have the opportunity to view the newly installed exhibition, “New Orange/Kenilworth – A Melting Pot of Many Cultures,” which comprises enlightening displays of historic photos, posters, artifacts and other materials that collectively tell the story of late 19th-/early 20th-century immigrants who settled in the Kenilworth area (formerly known as New Orange) and contributed to the early development of the community.

The featured exhibition has been made possible in part by a 2022 HEART (History, Education, Arts Reaching Thousands) Grant from the Union County Board of County Commissioners.  Funding for other aspects of the October 15-October 16 weekend program at the Nitschke House is being provided in part by the Kenilworth Municipal Alliance Against Alcohol and Drug Abuse/GCADA and the Kenilworth Education Association PRIDE/F.A.S.T. Committee.

Union County Across the Centuries History Trading Cards for David Brearley (1745-1790), Hannah Sayre Caldwell (1737-1780) and Tin Kettle Hill (1780-1906), along with Nitschke House postcards, will be available at the Nitschke House during “Four Centuries in a Weekend.”

​Visitors to the Nitschke House will be able to view the site’s “Kenilworth Heritage Walkway” featuring numerous engraved commemorative pavers that have been donated by local residents and businesses.  The walkway is part of a paved path that makes the site’s “teaching gardens” accessible to everyone, including those with physical challenges/disabilities.  The path, together with a pergola and fencing, are part of a major garden construction project made possible through funding generously provided by the Merck Foundation.  The project significantly supports and enhances the site’s multicultural garden-to-table foodways program, which shows the importance of home food gardens in the lifeways of the Nitschkes and other late 19th-century immigrants and which additionally demonstrates the continued benefit of gardening in promoting good health, an appreciation of nature and a sense of environmental stewardship.